Today, we have a short excerpt from Gareth L. Powell’s Fleet of Knives. The sequel to Embers of War, it is out now, published by Titan Books. Here’s the synopsis:

The former warship Trouble Dog and her crew of misfits is called upon by the House of Reclamation to investigate a distress call from the human starship the Lucy’s Ghost. Her crew abandon their crippled ship and seek refuge abroad an abandoned, slower-than-light generation ship launched ten thousand years before by an alien race. However, the enormous ship contains deadly secrets of its own.

Recovered war criminal, Ona Sudak, faces a firing squad for her actions in the Archipelago War. But, at the last moment, she is smuggled out of her high security prison. The Marble Armada has called for her to accompany its ships as observer and liaison, as it spreads itself across the human Generality, enforcing the peace at all costs. The alien ships will not tolerate resistance, and all dissenters are met with overwhelming and implacable force. Then her vessel intercepts messages from the House of Reclamation and decides the Trouble Dog has a capacity for violence which cannot be allowed to endure.

As the Trouble Dog and her crew fight to save the crew of the Lucy’s Ghost, the ship finds herself caught between chaotic alien monsters on one side, and on the other, destruction at the hands of the Marble Armada.

Read on for the excerpt…

The attack came while we were in the higher dimensional void, and it came without warning. I’d had a late-night card session with Santos and Kelly, and was making my way up the companionway to the bridge, eyes still bleary with sleep, when the Lucy’s Ghost slammed sideways, smacking me hard against the bulkhead.

I ended up on my back at the foot of the ladder. My left shoulder felt battered, and I’d scraped my right shin. I’d been carrying my antique leather pilot’s jacket in one hand, and had dropped it when I hit the wall; and somehow, I’d cut my forehead. When I put my hand to it, the fingertips came away red and sticky with blood.

“Hey!” I yelled up the companionway. “What the fuck was that?”

I could feel the artificial gravity flickering as it tried to recalibrate, having been unable to compensate for the savagery of the lurch.

Above me, Vito Accardi’s face appeared at the hatch.

“Something hit us, chief.”

Keeping one hand over the cut on my head, I scooped up my jacket and scrambled to my feet.

“Yeah, no shit?” I held onto the wall for support. With  the gravity skittish, I didn’t want to get caught off guard by a second impact. “What was it? Are we being shot at?”

Looking down at me with wide eyes, Vito shook his head.

The Lucy’s Ghost was a medium-sized trader, licensed to carry a hundred and sixty tons of cargo between the various worlds of the Generality. She was three hundred metres in length and a hundred and fifty across her beam. In profile, she was a blocky, industrial-looking three-sided chisel, with a blunt nose at the front, and chunky propulsion units at the rear. She’d had many owners in her time, and had travelled the length and breadth of the Generality, all the way from Earth to the Rim Stars and the Trailing Edge. In cross-section, she resembled a triangle with rounded points, split into three levels. The cargo area filled most of the large lower deck, with the remainder taken up by fuel containment and engines. The middle deck housed crew quarters, passenger staterooms, a cramped galley, maintenance shops and equipment storage. The smaller upper deck had been given over almost entirely to the bridge, but also housed the main passenger airlock and a small communal lounge area that sported a picture window, torn and scuffed leather seats and a variety of brown brittle-leafed spider plants.

The story around the ports—a rumour I’d done my best to encourage—was that at the age of seventeen, as a young dock rat, I’d won her in a game of cards. It wasn’t true, but it helped my reputation.

I had actually bought her with a combination of money inherited from a childless uncle and a large mortgage from the bank—a mortgage I was still paying off in monthly instalments. Now, ten years and around a thousand light years later, I’d been playing the part of “Lucky” Johnny Schultz for  so long, even I sometimes found it hard to remember which version of the story was real and which was made up.

Gareth L. Powell‘s Fleet of Knives is the sequel to Embers of War. It is out now, published by Titan Books in the UK and US. 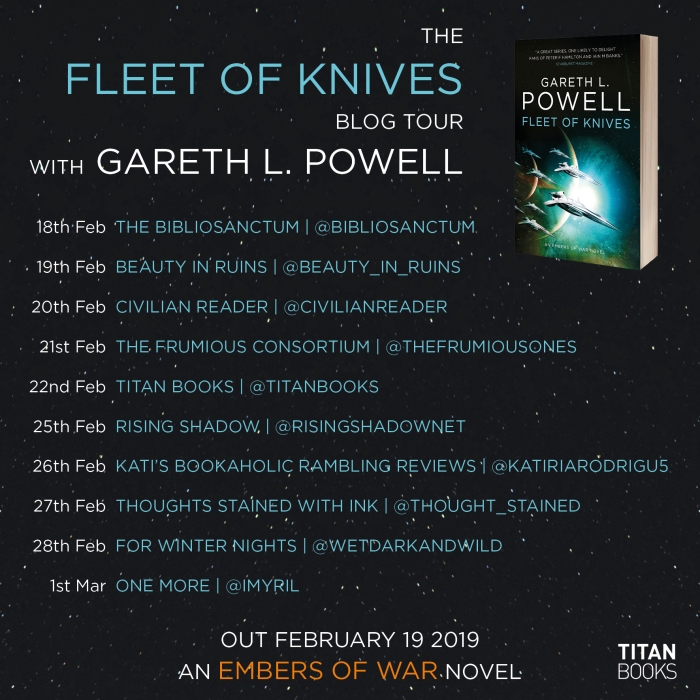