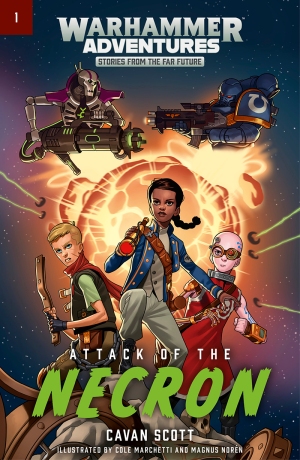 On the hive world of Targian, Zelia Lor helps her mother search for ancient tech, digging up treasures of the past on the wind-blown plains. They are happy. They are safe.

All that changes when the Necrons attack. Without warning, a host of robotic ships appear in the skies above Targian and rip the planet apart. Separated from her mother, Zelia must escape the doomed world, her only hope a scrambled transmission promising safety at a mysterious place known only as the Emperor’s Seat. Launched in an escape pod, she crashes on an icy wasteland far, far from home. But Zelia is not alone. She is joined by a rag-tag group of survivors – the street-tough juve Talen, gadget-obsessed Martian boy Mekki and super-intelligent alien-ape, Fleapit.

When Black Library first announced that they were going to release a range of novels for young readers, set in their WH40k and Age of Sigmar universes, I was intrigued. After all, how do you address the grimdarkiest of settings for young readers? With Attack of the Necron, Cavan Scott has absolutely knocked it out of the park. This is an excellent, entertaining primer on the WH40k universe.

I never doubted that there was a market for this series: after all, I started reading Warhammer fiction when I was in my early teens. At the time, the fiction was ‘lighter’, maybe more whimsical in general (see, for example, William King’s superb Gotrek & Felix fiction). A fair amount of Black Library’s fiction takes a darker look at the setting and forces operating within it — because in this grim, dark future “there is only war”, the books have often been quite violent and sometimes graphic. Obviously, this isn’t appropriate for all young readers. How does one appeal to these new enthusiasts, then, without covering up the fact that Warhammer 40,000 and Age of Sigmar are, well, war games? Turns out, this series holds the answer in the science fictional setting.

Long-time readers of Black Library fiction may well find the story a bit sanitized, but for new and younger readers, Attack of the Necron will provide a fantastic primer on the setting: some of the forces involved, some of the key concepts (the Warp is well-explained), and also some of the history of the universe (Dark Age of Technology, for example). Through the eyes of the young protagonists, we are given a quick look at hive city culture and society (one is an explorator/archaeologist, another is a mech, the third a former ganger).

The novel doesn’t hide from the fact that the 41st millennium is a violent and dangerous place: the Necron attack on the planet is devastating, and it’s very clear that not everybody survives. However, the story focuses on Zelior et al’s attempts to survive, solve the problems with which they’re faced, and learn to trust each other. They are each given hard lessons on new aspects of the universe, to which they hadn’t previously been exposed — interstellar travel, betrayal, death, and belligerent aliens, to name but three.

It’s a quick read, featuring some interesting and plucky characters. It was nice to see them learning to work together and trust each other. Fleapit was easily my favourite: think Terry Pratchett’s Librarian, but with a fascination and preternatural capacity for technology and invention, rather than library science. (Although, I would not discount the possibility that Jokaero are also very serious about their book cataloguing.)

Cavan Scott’s writing is clear, very well-paced, and sometimes amusing. I enjoyed this quite a bit, and I think any young reader thinking of learning about WH40k would get a lot out of Attack of the Necron. Long-time, older readers may also appreciate the refresher on the basics of the setting, as well as a reminder that those who inhabit this future are not as well informed as we are.

An excellent intro, this is definitely recommended.

Cavan Scott’s Attack of the Necron is out tomorrow, published by Black Library. If you are a fan of audiobooks, you may be interested to learn that it is narrated by David Tennant!