The third novel in the excellent Frank Marr crime series

Frank Marr was a good cop, until his burgeoning addictions to alcohol and cocaine forced him into retirement from the D.C. Metro police. Now, he’s barely eking out a living as a private investigator for a defense attorney — also Frank’s ex-girlfriend.

Ostracized by his family after a botched case that led to the death of his baby cousin, Jeffrey, Frank was on a collision course with rock bottom. Now clean and clinging hard to sobriety, Frank passes the time — and tests himself — by robbing the houses of local dealers, taking their cash and flushing their drugs down the toilet. When an old friend from his police days needs Frank’s help to prove he didn’t shoot an unarmed civilian, Frank is drawn back into the world of dirty cops and suspicious drug busts, running in the same circles that enabled his addiction those years ago.

Never one to play by the rules, Frank recruits a young man he nearly executed years before. Together — a good man trying not to go bad and a bad man trying to do good — detective and criminal charge headfirst into the D.C. drug wars. Neither may make it out.

Frank Marr is a private investigator who is trying to do good, while simultaneously battling his various (multiple) demons. The first two novels in David Swinson’s series — The Second Girl and Crime Song — were fantastic, and I blitzed through them back-to-back. Gripping, sharply written and populated with excellent characters, they are among the best novels I’ve read in years. As a result, Trigger was one of my most-anticipated novels of the year. I’m happy to report that it is another excellent crime novel, and did not disappoint.

Swinson doesn’t shy away from the grittier aspects of law enforcement in Washington, DC, nor does he paper over the fact that his protagonist is not the most ideal of heroes. Frank Marr is a fascinating character: a former cop, recovering cocaine addict, private investigator, and man of questionable morals. Marr is trying to reform himself, however. Trigger starts in a similar way to The Second Girl: Marr is breaking into a drug house. However, unlike in the first novel, he flushes the drugs he finds (while still taking the cash). Marr’s been clean(-ish) for about three years, now, but that itch is always there — it is one of the “triggers” of the title. 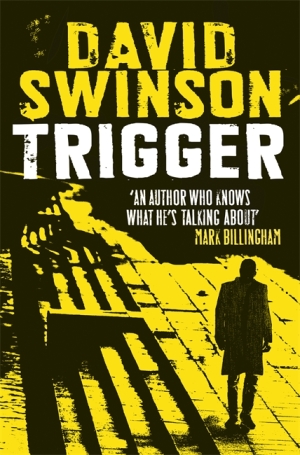 Swinson is very skilled at showing, rather than telling. It is in the small moments that he illustrates the tensions between Washington law enforcement and civilians: the tensions as well as the prejudices, the ingrained and systemic biases — many of which create or reinforce the spiral of distrust, overreaction and aggression. Almost every character is not being their best self, but the novel doesn’t feel relentlessly dark. Swinson has put them in positions that force them to confront their decisions, betrayals, compromises and prejudices. There is some social and political commentary, but it is expertly woven into the novel to not drown out the story — it’s relevant, stated in a manner reflective of who we believe Marr to be (the novel is told from his perspective).

At the centre of this novel is an officer-involved shooting, of an apparently-unarmed youth. The officer in question is one of Marr’s former partners and best friends, and he’s called in to conduct his own investigation of what happened, and see if Luna’s memory is correct (or if he’s lying). Throughout the novel, we are left wondering how Marr will react to whatever he finds — given his sketchy character and background, will he follow the evidence where it goes, regardless of what it means for his friend?

Trigger shows Marr growing and evolving as a character. He’s trying to make amends for some of his reprehensible, criminal behaviour in the past. He’s not very adept at it, but he manages to stumble into doing good in his own, inimitable way. He’s not averse to manipulating evidence or crime scenes in order to point the police in the right direction — he is, above all, a survivor. Even when he’s doing stuff that should set off alarm bells, readers can’t help but root for him, knowing that there is probably a good reason for it. (Not that, in real life, we should reward bad behaviour.) Calvin’s addition (well, return) to the series is especially welcome, and opens up a lot of possibilities for future instalments — indeed, the end of the novel suggests Swinson has plans to keep him around.

Excellent prose, three-dimensional and realistic characters, and an interesting story. Trigger is a really good read. Very highly recommended to all fans of crime fiction. The Frank Marr series remains one of my favourites.

David Swinson’s Trigger is due to be published in February by Mulholland Books in North America (12th) and in the UK (7th).

Also on CR: Reviews of The Second Girl and Crime Song

One thought on “Quick Review: TRIGGER by David Swinson (Mulholland)”