Skip to content
HomeQuick Review: I’LL BE THERE FOR YOUR by Kelsey Miller (Hanover Square Press/HQ) 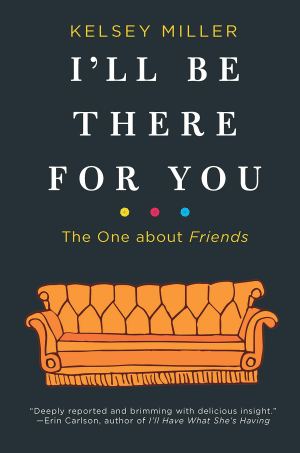 A “definitive” history of the TV show Friends

I’ll Be There For You is the definitive retrospective of the classic TV phenomenon. From its low-profile debut in 1994, Friends grew over the next decade to be the must-watch prime-time hit of a generation, and a certified classic.

Join Kelsey Miller as she relives the show’s most iconic moments, examines some of its controversies, and shines a light on the many trends it inspired from oversized coffee cups to the much-copied 90s haircut, The Rachel’.

Weaving incisive commentary, revelatory interviews and behind-the-scenes anecdotes involving high-profile guest stars, I’ll Be There for You is the most comprehensive take on Friends yet, and the ultimate book for fans everywhere.

I have been a fan of Friends since, I think, the end of season one. It is a comfort watch, and a series I often have on in the background. When I still lived in the UK, it was almost impossible to go a day (an hour?) without being able to find an episode on one of the digital channels. It’s a huge show, and continues to be so even a decade-plus since it ended. I was very interested, therefore, when I heard that someone had written a book about the show, purporting to be the definitive story. I was lucky enough to get a review copy. I found it to be a mixed reading experience.

I first heard about this book during an interview Matt LeBlanc did for The Hollywood Reporter‘s Awards Chatter Podcast. It’s a show I highly recommend, and David Schwimmer has also been guests quite recently, and whose interview was drawn on quite a bit in I’ll Be There For You. (While I’m thinking of Friends on Podcasts, I’d also recommend Sam Jones’s interview with Courtney Cox for Off Camera.)

My expectations were pretty high for this book, I must admit. Not only do I love the TV show (despite its many flaws, and the datedness of some of its handling of delicate issues), but I also love reading about Hollywood and behind-the-scenes accounts of movies and TV shows that I enjoy. Today, it’s very difficult not to learn about the shows and movies we enjoy: the internet and newsstands are packed with outlets that have behind-the-scenes accounts, features and gossip. This wasn’t the case for much of the time when Friends was on the air. Certainly, I had no idea where to look, so I missed pretty much all of the media coverage. I was really looking forward to learning more. Which I’ll Be There For You sort of provided…

After a rather bland introduction, Miller dives into the development stage of the show — how Marta Kauffman and David Crane met, started their careers and ended up with Kevin S. Bright in Hollywood, developing Friends. The author then takes us through where-they-were-then in relation to the cast, and how they got the parts. After a few pages, I flicked to the book’s index and I noticed that basically everything in here was drawn from interviews and features conducted and written by other people. Yes, Miller does interview some commentators, academics and journalists, but very few of them (maybe just David Wild) were really connected to the show. This was a little disappointing.

As a result of this, the book is front-heavy: it’s very good when talking about the first few series, but then gets progressively thinner and thinner, and a little disjointed. There are times when Miller ties the show into issues of the day — including diversity, LGBTQ, the #MeToo movement, for example — but it feels rather disjointed. All of these are valid topics, especially when you consider how popular the show remains, despite it’s oh-so-very-lily-whiteness and blizzard of gay jokes (to name but two things). But the way Miller wrote these chapters or sections in the book was clunky, and seemed to want to make it an issue while simultaneously dismissing it as “oh, it was just how it was back then”. Also, it would have been (more) interesting to hear/read what the cast and crew thought about this, with hindsight or from the time. At times, certain things were given a lot of space, while seemingly just-as-interesting and important topics were given short shrift. Which made me wonder what the book was supposed to be… The book seemed to run out of steam, as if Miller was bored of her subject, and just wanted to get it done.

This book could and perhaps should have been so much more. I don’t understand why there weren’t any original interviews with and commentary from anyone connected to the show. I get that the six cast members are probably impossible to get in touch with. But there were ten seasons — none of the writers, directors, or anyone else was available to comment?

I’ll Be There For You is by no means definitive, therefore. I think there was so much more to cover and explore. I’m really surprised that nobody’s tried to do a more substantial book. (There’s an oral history somewhere, which I’m going to have to hunt down.) I think Friends would have really benefitted from something like the recent The Daily Show Oral History, which is fantastic.

Nevertheless, despite this considerable shortcoming, I can’t deny that I enjoyed reading the book. I read it in just three sittings (one rather long, insomnia-induced binge). It included plenty of tidbits that I hadn’t heard or read before, because I didn’t grow up with the magazines and interview sources when the show was airing. At the same time, it also didn’t feature plenty of the nuggets of info and detail that have filtered out of the years since it first stopped airing. Only passing mention was made of the fact that Bruce Willis was on the show, but no mention of how they got him to do it (he lost a bet wth Matthew Perry while they were filming The Whole Nine Yards).

I’d recommend the book to fans of the show, but go in knowing that it’s by no means definitive, and is best when covering the early years of the show. Ultimately, this first half of the book was packed with interesting details, but then fizzled out.

I’ll Be There For You is published by Hanover Square Press in North America and HQ in the UK.