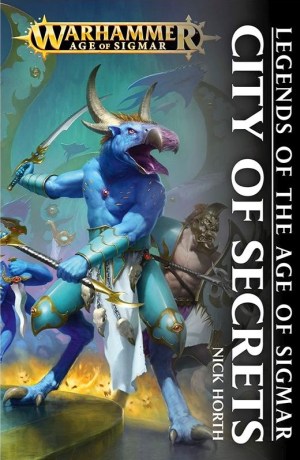 A fast-paced Warhammer novel with a classic feel

Excelsis is the city of secrets, a grand and imposing bastion of civilisation in the savage Realm of Beasts. Within its winding streets and shadowy back alleys, merchants deal in raw prophecy mined from an ancient fragment of the World That Was, and even the poorest man may earn a glimpse of the future. Yet not all such prophecies can be trusted. When Corporal Armand Callis of the city guard stumbles upon a dark secret, he finds himself on the run from his former comrades, framed for a crime he did not commit. Only the Witch Hunter Hanniver Toll knows the truth of his innocence. Together the pair must race against time to save Excelsis from a cataclysm that would drown the city in madness and fear.

I’ve been reading fiction based on Games Workshop’s IPs for a very long time. One of the classic themes or premises of early fiction set in the Warhammer fantasy setting was that of a Chaos conspiracy in an Empire city or town. City of Secrets offers a well-composed spin on this trope, albeit set in the Age of Sigmar — a time when Chaos won, and dominates the majority of the world.

As you may have seen from my reviews of the End Times series of novels, I’m a fan of the Warhammer setting. However, I’ve never quite managed to get used to the new Age of Sigmar. I don’t know why — maybe I just don’t like change and am getting old? Regardless, I recently read Josh Reynolds’s Auction of Blood short story, which managed to grab my attention. After that, I looked for a shortish Age of Sigmar novel to see if I could find something else to help get me situated in the new Warhammer reality (for want of a better phrase). City of Secrets jumped out at me. As I mentioned in the first paragraph, I was drawn to the classic-sounding premise. Horth works as a background-writer for Games Workshop, too, so there was a lot to recommend the novel.

For the main, I enjoyed this. The novel does feel like its main point is to flesh out the world, and readers are given an interesting look at a free city in a world dominated by hostile Chaos forces. The main characters are well-written, interesting and varied. Through them, we see the difficulties faced by the free peoples, the many dangerous forces arrayed against them. Events build to a pretty epic denouement, with action and battle aplenty. The novel doesn’t feel as polished as the fantasy fiction of, say, Josh Reynolds, Gav Thorpe, Guy Adams, or C.L. Werner, but there’s a lot to enjoy here. I think, if Horth writes more novels and short fiction, he could produce some solid additions to the Age of Sigmar library.

There’s scope for expansion beyond the story, and I’d certainly be back for more, if a novel or short story appeared featuring the surviving characters. If, like me, you’ve been looking for a way in to the new Warhammer setting, then City of Secrets could go a long way to getting you there.

Next up in my Age of Sigmar reading (in the not-too-distant future), I think, will be Josh Reynolds’s Spear of Shadows.

Nick Horth’s City of Secrets is published by Black Library.