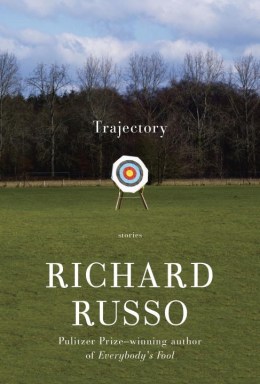 A new anthology from the Pultizer Prize-winning author

Russo’s characters in these four expansive stories bear little similarity to the blue-collar citizens we’re familiar with from many of his novels. In “Horseman,” a professor confronts a young plagiarist as well as her own weaknesses as the Thanksgiving holiday looms closer and closer: “And after that, who knew?” In “Intervention,” a realtor facing an ominous medical prognosis finds himself in his father’s shadow while he presses forward – or not. In “Voice,” a semiretired academic is conned by his increasingly estranged brother into coming along on a group tour of the Venice Biennale, fleeing a mortifying incident with a traumatized student back in Massachusetts but encountering further complications in the maze of Venice. And in “Milton and Marcus,” a lapsed novelist struggles with his wife’s illness and tries to rekindle his screenwriting career, only to be stymied by the pratfalls of that trade when he’s called to an aging, iconic star’s mountaintop retreat in Wyoming.

I’m a relatively recent convert to Russo fandom. I read the author’s campus novel, Straight Man a few years ago, and started to collect all of his other novels. I finally got around to reading the Pulitzer-winning Empire Falls, which I very much admired. Ever since, I have been eager to read more of his work. Trajectory collects four of Russo’s shorter fictions, and offers an excellent entry point in to his fiction. I very much enjoyed this book.

The four stories are pretty different from each other, but there are shared themes. Family, of course, is central: in each story, the protagonists are navigating whatever life may be throwing at them, while also dealing with or handling family life. There is also the shared themes of disappointment, although Russo never becomes morbid with that subject.

Teachers/professors feature prominently, too. This was interesting to me, given my own academic history and my time spent teaching undergraduates. Indeed, I had a similar experience with student plagiarism as the main character in “Horseman” (although, I handled it far more bluntly than she). Russo is maybe making a statement about student privilege in today’s universities, which is yet another subject that is of growing importance and interest.

“Milton and Marcus” is probably my favourite inclusion, as it takes a look at the screenwriting industry, and pokes some fun and takes some jabs at the idiosyncrasies of and those who operate within that sphere — either their fickleness, or their clear remove from “common” concerns and ideas of what life actually is for most people. From their lofty, privileged perches their whims can have harsh repercussions of which they are completely oblivious. (So, I suppose another theme would be various types of privilege.)

One of the four stories is already available as a Kindle short — “Voice”, which was originally published as Nate in Venice. I think this may be a longer version of that story, but that could just be my mind playing tricks on me — it felt more substantial, this time around (and I thought it was excellent the first time I read it).

Russo’s writing is excellent, as can perhaps be expected by this point. He is neither over-indulgent nor skimping, giving the reader just what they need to form a mind’s picture of each scene. The characters are realistically drawn, believable and often sympathetic.

I very much enjoyed this, and am looking forward to catching up on Russo’s past short fiction and full-length novels (all of which I have since purchased).

The author’s novels have recently been re-issued in the UK by Allen & Unwin: Empire Falls, Straight Man, Mohawk, The Risk Pool, Nobody’s Fool and Everybody’s Fool.