Skip to content
HomeReview: IF WE WERE VILLAINS by M.L. Rio (Flatiron/Titan)

Oliver Marks has just served ten years in jail – for a murder he may or may not have committed. On the day he’s released, he’s greeted by the man who put him in prison. Detective Colborne is retiring, but before he does, he wants to know what really happened a decade ago.

As one of seven young actors studying Shakespeare at an elite arts college, Oliver and his friends play the same roles onstage and off: hero, villain, tyrant, temptress, ingénue, extra. But when the casting changes, and the secondary characters usurp the stars, the plays spill dangerously over into life, and one of them is found dead. The rest face their greatest acting challenge yet: convincing the police, and themselves, that they are blameless.

M.L. Rio’s debut novel turned out to be a very pleasant surprise. The writing is excellent, the story is gripping, and the characters are varied, realistic and engaging. An easy, early contender for best novel lists. I very much enjoyed this.

It is probably lazy to make a comparison to Donna Tartt’s The Secret History — It’s a campus novel! Something bad happens! We don’t really know what happens until the end! — but I can’t think of a better contemporary.

At the start, Oliver Marks is released from jail, after spending a decade locked up for… we know not what (yet). He has made a deal with the detective who put him away, to tell the full story of what happened at the college. Split into Acts, each opens with a prologue in the present, before taking us back. Rio takes us through the lives and relationships of the small group of final-year drama students. We get to know their insecurities, their motivations, and a little bit about their backgrounds (some more than others). 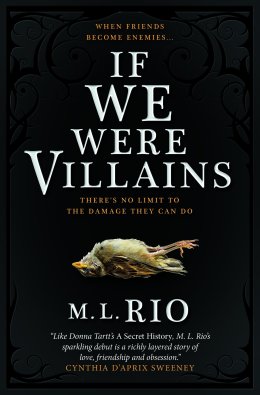 There are many references to Shakespeare and his works in the novel — the students put on a number of his plays, and, like many dedicated arts students, they live their art. They throw out Shakespeare quotations frequently (sometimes engaging in almost entire conversations via quotation), and there’s clearly some framing going on with the choice of the plays and scenes the author features in the novel. However, much of this was lost on me, as I am woefully undereducated when it comes to the Bard. Nevertheless, I do not believe I missed out, and it certainly didn’t stop me from enjoying the novel. Aside from a slightly slow beginning (more to do with my mood than the novel), I quickly became gripped by the story: eager to discover what happened, who was involved, and how Oliver ended up in jail.

Rio’s writing is excellent, tightly composed and briskly-paced. The narrative moves at an excellent clip, never feeling rushed while also never dwelling or becoming bogged down with exposition. I can’t think of anything I didn’t like about the novel. All of the characters felt realistic, their interactions natural (or, if not wholly so, then similar enough to what I’ve seen from similar students). The ending is an intriguing mix of heartbreaking and hopeful.

Very highly recommended. I think this is going to be very well received. One of the first must-reads of 2017.

If We Were Villains is published in North America by Flatiron Books, in April; and in the UK by Titan Books, in June 2017.

2 thoughts on “Review: IF WE WERE VILLAINS by M.L. Rio (Flatiron/Titan)”