Is someone killing the gods in New York…?

Manhattan has many secrets. Some are older than the city itself.

Winter in New York: snow falls, lights twinkle, and a very disgruntled Selene DiSilva prowls the streets, knowing that even if she doesn’t look for trouble, it always finds her.

When a dead body is discovered sprawled atop Wall Street’s iconic Charging Bull statue, it’s up to Selene to hunt down the perpetrators. Her ancient skills make her the only one who can track a conspiracy that threatens the very existence of the gods, Selene — once known as Artemis — among them.

Jordanna Max Brodsky’s debut novel, The Immortals was a great surprise last year: it brilliantly blended Greek mythology and crime fiction, imaginatively updating the former. It was one of my favourite novels of 2016. Winter of the Gods builds on the new mythology, and offers the gods a new, deadly challenge.

Much of what I liked in The Immortals returns in this second novel: Brodsky really knows her mythology, and she weaves it brilliantly into the story. While there are moments of explanation, it never felt like a clunky info-dump. The author does some great deep-diving into the myths and legends, picking up on some lesser-known (but just as interesting) facets of either the gods or their experiences. A couple of different gods get more attention in this novel — especially Hephaestus (or “Flint”, as he’s going by these days) who is one of my favourites, as well as Eros and Mercury (to name only three). Each one brings something new to the table, and I definitely enjoyed the way Brodsky has brought them into the 21st century. There’s some good action, too. Unlike the first novel, I think there is more set-up for expanding the series further (please let there be more!). 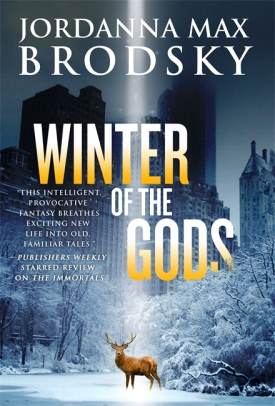 That being said, while I enjoyed the novel, and the mystery at its heart, Winter of the Gods didn’t feel quite as smooth or assured as The Immortals. The momentum wasn’t as smooth, and there were times when I felt the novel was being stretched out. Also, Selene and Theo’s relationship wasn’t as convincing this time around. I understand that there was a reason for this (Artemis was the Chaste One, after all), but at times it felt forced and unrealistic, even unnatural. In fact, Selene seemed less-well drawn and less-developed in general, this time around. A character not as strong as in the first book. This was a little disappointing. Other character interactions and relationships were more natural and interesting. The antagonists were a good example of a long-gestating conspiracy cult (I figured out the twist shortly before it was revealed, although I’d had an inkling earlier on due to just a smidge of telegraphing).

Overall, this is a good, if imperfect, follow-up to the highly recommended The Immortals. If you are a fan of the first novel, I think you’ll find much to like in this: plenty of mythology, interesting characters, some mystery, and a pretty engaging story.

Also on CR: Review of The Immortals

Published in February by Orbit Books in North America and the UK.

2 thoughts on “Quick Review: WINTER OF THE GODS by Jordanna Max Brodsky (Orbit)”