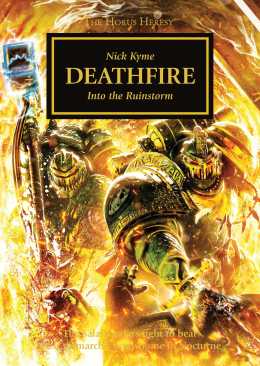 The surviving Salamanders search for purpose and hope

Vulkan lies in state beneath the Fortress of Hera, and yet many of his sons still refuse to believe that he is truly dead. After a seemingly miraculous rescue by the Ultramarines, Artellus Numeon, once captain of the Pyre Guard, urges the other Salamanders on Macragge to leave Imperium Secundus and return their primarch’s body to the home world of Nocturne — there to be reborn in the flames of Mount Deathfire. But Numeon grapples endlessly with his doubts and fears for the future of the Legion, while their foes seek to carve out new destinies of their own…

It feels like a very long time since I last read a Horus Heresy novel. I used to read them as soon as they were released, but I seem to have taken a bit of a break. So, I decided to catch up, and ended up reading the last four novels in a couple of weeks. For the main, it was great to be reading back in that setting. Deathfire, the sequel to Vulkan Lives moves the Salamanders’ story forwards, eventually bringing the shattered legion some hope. It is not, however, an easy journey…

Now, some people may be slightly annoyed to learn that this novel is still mostly connected to the events at Calth and Imperium Secundus on Macragge. I, too, am becoming a little impatient for the story to move forward. That being said, though, I was very happy to read more about the Salamanders — a previously ignored Legion that has been revived by the Heresy series and Kyme’s novels in particular. (Although, yes, he did write some Salamanders novels pre-Heresy series.)

Deathfire is not as macro-scaled as some Heresy novels, but it benefits from the tight focus on the remaining Salamanders leadership. Numeon, in particular, gets a lot of attention, so fervent is he in his belief that Vulkan is actually alive — all evidence to the contrary. His brother legionnaires (not to mention outsiders) struggle with his faith in Vulkan’s endurance and stubbornness on the issue, but he slowly wins many of them over. Numeon et al struggle to get back to Nocturne, confronted by multiple obstacles at seemingly every turn. Dogged by traitor legions, denizens of the warp, and internal doubt and dissension, their journey is one tough grind.

It is maybe a little too much of a slow grind, and I did find myself thinking the book could have been pruned just a little bit. At the same time, though, Kyme uses Numeon’s struggle and belief as a way to start planting the seeds of the supernatural aspects and “facts” of the loyalist legions. It’s never explicitly told, but one way of reading some of Numeon’s actions can be linked to the “religious” miracles and help sometimes found in the Warhammer 40,000 setting. (I won’t go into any more.) This development had to happen, of course, as the traitors’ increasing warp-related activities have already opened that door for loyalist aspects.

Kyme’s writing is excellent throughout, his characters are interesting and well-rounded and -developed. I very much enjoyed reading about their struggles and experiences. Despite wishing it had been just a bit tighter and briskly-paced, this was nevertheless another very good addition to the Horus Heresy series. (Which is inching ever-so-slowly towards the end…)

Recommended for all fans of the series, certainly.