Earlier this week, Tor UK unveiled the cover for Col Buchanan‘s fourth Heart of the World novel, Fierce Gods. If you’ve been reading CR for a while, you may have spotted that I really enjoyed the first two novels in the series, Farlander and Stands a Shadow. I haven’t yet had the chance to catch up with the third book, The Black Dream, but I hope to do so very soon. In the meantime, here’s the synopsis for Fierce Gods:

A time of reckoning has begun.

For ten years the Free Ports held their own against the despotic empire of Mann – but the empire is now poised to destroy them. The crucial fortress city of Bar-Khos is under attack and its freedom depends on a few unsteady hands.

Betrayal could come from any side, at any moment. While chaos reigns, Nico will search for his captive mother and attempt to defend his people. And Shard the Dreamer will hunt for legendary charts, which could yet save the city.  However, a Red Guard officer with gone rogue could bring about the end,
and a visitor from another world has a hidden agenda.

With the war entering its darkest hours, will any of them survive?

Also on CR: Interview with Col Buchanan (2011); Reviews of Farlander and Stands A Shadow 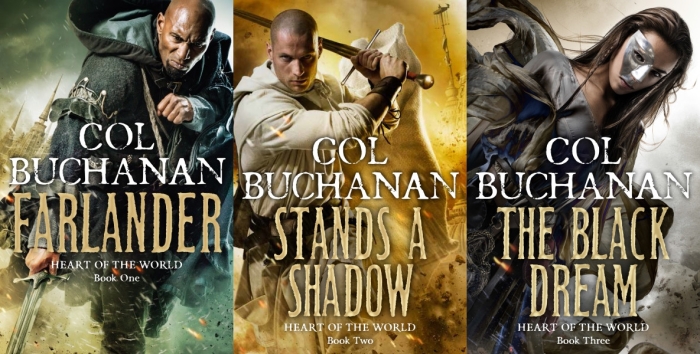 One thought on “Upcoming: FIERCE GODS by Col Buchanan (Tor)”