Skip to content
HomeReview: THE SUDDEN APPEARANCE OF HOPE by Claire North (Orbit) 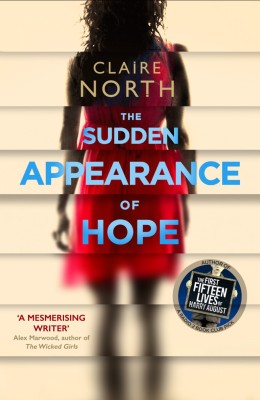 An intriguing novel about identity and isolation, thieves and scary tech…

My name is Hope Arden, and you won’t know who I am. But we’ve met before — a thousand times.

It started when I was sixteen years old.

A father forgetting to drive me to school. A mother setting the table for three, not four. A friend who looks at me and sees a stranger.

No matter what I do, the words I say, the crimes I commit, you will never remember who I am.

That makes my life difficult. It also makes me dangerous.

Long-time readers will know that Claire North is one of my favourite authors. With each new novel (and novella, because we have to include the linked Gamehouse trilogy), North takes reading on a riveting journey of unexpected and thought-provoking directions. The Sudden Appearance of Hope is no exception, with one of the most intriguing characters I’ve read in a while. Well, maybe since North’s previous novel… I enjoyed this a lot.

Hope is a fascinating character, and North does a wonderful job of inviting the reader in the world and head of someone who is forgettable to those she meets. From the heart-wrenching realization of her family forgetting her — can you imagine how awful that would be? — to her run-ins with the scientists and mercenaries behind an insidious app/cult Perfection, Hope shows us how she has adapted to her condition.

The clear advantages it provides for a life as an international thief, for example — whenever a cop leaves the room, they forget she was there and she can basically wander out. However, the disadvantages are equally clear: how does one forge a connection with someone, if any time spent apart (even just a quick trip to the bathroom can be enough) winds the clock back to zero? The novel poses plenty of questions for the reader about what makes us who we are, and the importance of other people. It’s a conundrum akin to Schroedinger’s Cat, one that maybe plagues Hope: if nobody remembers you, were you ever really there? North does a great job, showing the wildly different experiences of Hope and those she meets. It’s really very well done, especially her strange “relationship” with the inspector who spends so many years tracking her.

As the novel shifts from generally following Hope and her escapades as an international thief, to a plot more centred on Perfection and the people behind it, and the forces mobilized to ensure its success, things start to get a little weird. It’s difficult to discuss without spoiling certain plot points, but Hope’s character goes through a strange shift (somewhat understandably), and some character traits started to feel exaggerated and just a little strange. I’m nitpicking, but there was a noticeably less-smooth second half to the novel. Still very interesting and intriguing, though.

While not quite as strong as her previous fiction, The Sudden Appearance of Hope is still a fantastic achievement and brilliant novel. Very highly recommended. I can’t imagine this author ever writing a novel that isn’t a Must Read of the year.

Published by Redhook in the US and Orbit in the UK.

Also on CR: Reviews of The First Fifteen Lives of Harry August, Touch and the Gamehouse Trilogy

4 thoughts on “Review: THE SUDDEN APPEARANCE OF HOPE by Claire North (Orbit)”