So, DC Comics is re-branding again. After five years, the New 52 has been brought to an end (judging from the leaked images from the DC Rebirth #1 issue, through an entirely-expected timey-wimey bit of trickery), and the entire DC line-up is, you guessed it, being renumbered again. All but two series are turning back to #1s. The two exceptions? Action Comics and Detective Comics — both of which are turning back the clock even further, and… picking up their numbering pre-New 52. I don’t really understand why, because the continuity of the New 52 is supposedly staying (aside from the aforementioned timey-wimey muddling). The Action Comics storyline sounds interesting (see here), but not as interesting as Detective Comics. Here are the details and synopsis for the first issue, #934:

“RISE OF THE BATMEN” Chapter One

An unknown predator begins outdoing Batman, taking down dangerous threats with military precision. It’s up to the Dark Knight and series costar Batwoman to rally and train the young heroes of Gotham City to end this mysterious threat!

WHAT NOW: Batman and Batwoman begin training Spoiler, Red Robin and Cassandra Cain, but is the villainous Clayface ready for redemption?

This sounds pretty interesting, so I think I’ll be checking this series out, when it’s released on June 8th. What I’ve read of Tynion’s New 52 work, he’s a good writer. The New 52 iteration of Detective Comics was pretty shaky to begin with, but was brilliantly rescued by Gregg Hurwitz (penning three of my favourite Batman stories), and then sadly petered out a bit again afterwards — with the exception of Benjamin Percy’s two-parter, which was excellent. 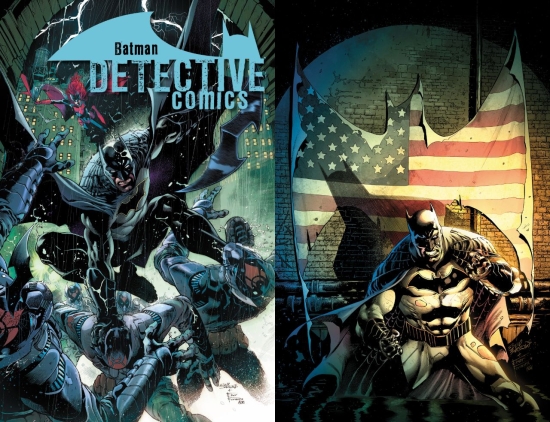 Now, for those “Thoughts on DC Comics’ Rebirth”:

Given how muddled and chaotic Marvel’s run of comics has become (anyone read “Time Runs Out”/”Out of Time”?), I really hope the Rebirth is good. Both of the mega-publishers’ output has been somewhat disappointing, of late — although, I will admit to having lost track of many DC titles quite some time ago.

I just haven’t been able to generate much enthusiasm to read their series. I’ve borrowed quite a few Superman and Action Comics collections from the library twice, now, and taken them all back after reading just a handful of pages. In fact, I haven’t read any of DC’s titles since the end of Joker: Endgame. Partly, because I wasn’t really in the mood for comics at the time, but also a bit of fatigue. I know many people go through this sort of DC/Marvel comic-funk after varying periods of time, but the constant cross-overs, Events, re-boots, switch-ups, resurrections, “shocking revelations” that end up not being shocking at all (and predictable)… Meh. The constant focus on Spectacle, as opposed to Story was tiresome. Also, the fact that no major change was guaranteed to last. Everything seems reversible, and you can almost set a watch to it.

Geoff Johns has said, “Rebirth is about focusing in on the core of the character and their respective universe… It brings back what has been lost: the legacy of the characters, the love and the hope of the DCU!” If this is true (and I’m skeptical, but cautiously optimistic), then maybe I will become a DC-reader again. I picked up the DC Rebirth #1 issue a few minutes ago — if there’s anything interesting, I’ll put together a mini-review or something later today.

I’m certainly interested in at least trying anything Benjamin Percy writes, and probably Dan Abnett. I haven’t been following the plentiful press-releases about Rebirth, so I don’t know who else is writing — but a quick browse on ComiXology’s “DC Universe: Rebirth Pre-Orders” page offers up quite a few potentially interesting titles. If I do start following the publishers’ series again, I can’t help but predict that it will be another temporary return, before the interesting stories are played out, the recycling begins, and I decide there are better things to spend my money on, and better things I could use my time to read.

Percy will continue writing Green Arrow into the Rebirth Era

I would like DC’s Rebirth to work — I miss quite a few of the characters, and there was something nice about catching up with them monthly (or every six months, in a new collection). I’m also curious to discover if any writer is able to come up with a Superman story that is resolved without the titular character just having to hit harder than anyone else…

Any Rebirth titles caught your attention?