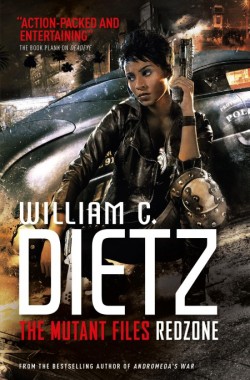 Redzone, the second novel in William C. Dietz’s new urban fantasy The Mutant Files series, is out tomorrow in the UK, published by Titan Books. Below you can find an excerpt from the novel. First, though, here’s the synopsis:

The year is 2065, almost thirty years since a bioterrorist attack decimated the population. The world has been divided, and new nations have formed. Those mutated from exposure inhabit the red zones, while “norms” live in the green zones.

In the nation of Pacifica, Los Angeles detective Cassandra Lee is in charge of investigating a disturbing case, tracking a cop killer dubbed the Bonebreaker. But strange new murders have occurred, falling outside the normal pattern and leaving Lee and her team wondering if the serial killer has become unpredictable — or if he’s no longer acting alone…

To make matters worse, Lee’s attention is diverted after she receives a letter from her long-lost mother. Now she must venture into the red zone, a lawless land where might makes right — and where the biggest danger may be her own family.

It is the sequel to Deadeye. Read on for the excerpt…

Even as a little girl, Lee had found it difficult to get up in the morning, and nothing had changed. So Lee set two alarms and placed both of them well away from her bed. When the first one went off, she managed to muffle the sound by pulling a blanket up over her head. Even so, the second and more shrill alarm was still audible.

Finally, swearing like a sailor, Lee threw off the bedcovers and hurried to silence both machines. That was when the true extent of her accomplishment struck her. She was running on time! And a good thing, too, since she was supposed to attend a very important meeting at 8:00 a.m. Lee hurried to shower, dress, and leave the apartment.

Calling her police car “unmarked” was something of a misnomer because it had exempt plates and was therefore a target for graffiti. Lots of it. So, with a small GPS and cell-phone detector in hand, she circled the car looking for trackers and concluded that it was clean.

After stopping at Maria’s for breakfast, Lee set off for work. Fifteen minutes later, she entered Conference Room B on the seventh floor of the LAPD headquarters building. There were some familiar faces and a few she didn’t know. And that made sense since Chief Corso had stolen resources from a variety of organizations in order to staff Operation Thunderstorm.

Lee chose to sit next to Detective Dick Yanty. He was balding, wore a pair of wire-rimmed glasses perched on the end of his nose, and was dressed in the usual sports coat. Or maybe he had two jackets that were identical. He raised a doughnut by way of a salute. “Good morning, Cassandra . . . Where’s the burrito? Are you on a diet?”

Lee made a face. “No wonder your parents named you Dick . . . They knew how things would turn out.”

Yanty laughed. “What do you think? Are we about to take part in a huge circle jerk? Or is this for real?”

All of the participants were seated by then, and as Lee looked around, she counted twenty-five people. Jenkins was the only person still on his feet. He cleared his throat. “Welcome to Operation Thunderstorm. Our mission is to find the serial killer known as the Bonebreaker and bring him to justice.

“The fact that you are here, sitting in this room, means you are one of the best and brightest that the department has to offer. Congratulations on making the cut. Your reward will be the same pay you’re already receiving, longer hours, and the satisfaction that flows from working on a high-priority case.”

Jenkins’s eyes roamed the room. “Okay, enough rah-rah. Let’s get down to brass tacks. Operation Thunderstorm is going to be structured in an unusual way. The people in this room will be divided into two teams. Detective Cassandra Lee will lead the first team—which will be referred to as the ‘public team.’ Their job will be to pursue the existing investigation and do so in a manner calculated to attract the Bonebreaker’s attention. According to the psychological profile our shrinks put together, he may perceive the public team’s activity as a personal affront and try to kill Lee or one of her detectives.

“That’s where the shadow team comes in. They, which is to say most of you, will report to Lieutenant Brianna Wolfe here . . . You may be familiar with her role in breaking the Troba drug operation. Brianna, please stand up so everyone can see you.”

Lee didn’t know Wolfe and hadn’t paid any attention to the woman until then but saw that she was quite striking. The first and most jarring aspect of her appearance was the blond crew cut she wore. But rather than make her look masculine, the severe hairstyle served to emphasize her femininity. Wolfe was dressed management-style, in a nicely tailored suit and some tasteful jewelry.

Wolfe looked around the room, nodded to some of the people she knew, and paused as her eyes came to rest on Lee. A spark seemed to jump the gap. Not a sexual spark . . . but something akin to recognition in spite of the fact they didn’t know each other. And that was the moment when Lee knew that Wolfe was a potential enemy.

But why? The obvious answer was competition. In spite of her aversion to publicity, Lee had a high public profile, and Wolfe didn’t. And the other woman was on her way somewhere. To deputy chief? Yes, Lee would have been willing to put money on it. Then the moment was over as Wolfe took her seat, and the briefing continued. “The shadow team will watch over the public team twenty-four hours a day,” Jenkins said. “And that will require a lot of resources—so the public team is going to be small.

“The next few days will be spent putting electronic surveillance gear into place—and working out the details required to keep the operation running. Once we accomplish that, we’ll hold a press conference, with Detective Lee standing front and center. Will the Bonebreaker take the bait? Let’s hope so. But if he does, and the shadow team fails, then someone on the public team will die.”

There was total silence as Jenkins looked down at a piece of paper. “Okay, last, but not least . . . This is a secret operation. Do not, I repeat do not, disclose any aspect of what we are doing to other members of the LAPD, to your family, or to the press.” Jenkins finished with a nod. “That’s it . . . Let’s do this thing.”

A day had passed since the briefing, and Lee was about to meet with her two-person team. They were gathered in a small conference room on the sixth floor. Detective Dick Yanty was taking the opportunity to eat his lunch. It consisted of the P&J sandwich that his wife prepared for him every morning plus a carton of milk. Milo Prospo was digging into a meal purchased in the cafeteria. Lee wrinkled her nose. “What is that?”

Prospo looked up. He had black hair, bushy brows, and a perpetual five o’clock shadow. “It’s meat loaf with mashed potatoes. You should try it.”

“Right . . . When I want to go on medical leave, I’ll jump on that. Okay, first things first. What’s wrong with you two? Jenkins told me that you volunteered! That’s crazy.”

Yanty smiled vaguely. “Not my brightest moment, that’s for sure. But I’ve been working on the Bonebreaker case for years . . . And you’re going to need someone who is familiar with the evidence. A historian, so to speak. Assuming you plan to work the case, that is.”

Yanty pushed his glasses up onto the bridge of his nose and looked Lee in the eye. The challenge was obvious. Was the public team going to investigate? Or sit around and wait for the serial killer to attack one of them? Lee nodded. “I’m glad you raised that issue. Damned right we’re going to work the case. And hard, too . . . So your familiarity with the evidence will be a huge help. What about you, Milo? Why did you volunteer?”

Prospo barely contained a belch, and said, “Sorry.” When he frowned, two bushy brows became one. “McGinty was a friend of mine. So this is personal. I hope the Bonebreaker comes for me because if he does, I’ll kill the bastard.”

It was said matter-of-factly—and without a trace of humor. Prospo was serious. Never mind the score, which was the Bonebreaker nine, police zero. Or the fact that the detective was well past fifty and at least twenty pounds overweight. Prospo saw himself as a stone-cold killer. Lee considered some sort of lecture and decided against it. “So,” Yanty said. “When’s the press conference?”

“At three,” Lee answered. “The media-relations people figured that would provide the TV stations with plenty of time to get the story on the evening news.”

Prospo used a piece of bread to soak up the last of the gravy. “And then?” he inquired.

“And then I’m going to reinterview Cheyenne Darling. I read the original transcript, and there’s no color. It’s a straight-on ticktock of what time McGinty went out, when Darling became worried, and so on. I’m hoping for something more.

“Meanwhile, I’d like to see you guys go through the list of people the team talked to in the past and follow up. How many of them were in the slammer when the chief disappeared? How many have some other alibi? And how many are dead? Let’s narrow the list.”

“Sounds good,” Yanty said, as he threw his brown lunch bag into a trash can. “Have fun at three.”

“Watch your six,” Lee replied. “The Bonebreaker could come after any one of us.”

“Roger that,” Prospo said, as he carried his plate out of the room. “I’ll be waiting for him.”

Deadeye and Redzone are published in the US by Ace Books. Details of the third book, Graveyard, have also been released by Ace.