Skip to content
HomeReview: UNDER GROUND by S.L. Grey (Macmillan) 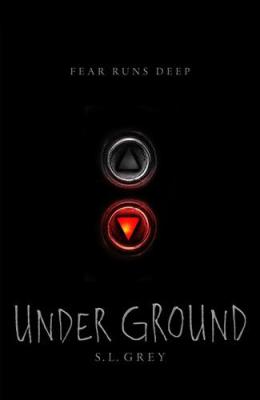 They thought they were safe…

A global outbreak of a virus sends society spinning out of control. But a small group of people have been preparing for a day like this. Grabbing only the essentials, they head to The Sanctum, a luxury self-sustaining underground survival facility where they’ll shut themselves away and wait for the apocalypse to pass.

All the residents have their own motivations for buying into the development. A mix of personalities, they are strangers separated by class and belief, all of them hiding secrets. They have only one thing in common: they will do anything to survive.

The doors close, locked and secured with a combination that only one man knows. It’s the safest place they could be. Nothing could go wrong. They’re ready for anything…

But when a body is discovered, they realize that the greatest threat to their survival may be trapped in The Sanctum with them.

“S.L. Grey” is the critically-acclaimed writing partnership between Sarah Lotz and Louis Greenberg. I haven’t read their previous novel, The Mall, which received rave reviews. This latest novel is a (perhaps oxymoronically) fast-paced slow-burn thriller. A relatively slim novel (under 300 pages), after the cast are gathered at the Sanctum, things quickly spiral out of control, and all hell breaks loose. I wasn’t sure what to expect from Under Ground, but I knew from past experience with Lotz’s writing that it would at least be very good. I wasn’t disappointed — this is a gripping, briskly-paced novel of psychological suspense and the fragility of social norms.

Grey’s prose is superb, stripped down and briskly-paced, it keeps the novel moving forward. The chapters rotate POV through a handful of the characters, and the authors do a great job of giving each their own distinctive voice and perspective on events. I didn’t sympathize with all of them, but I nevertheless enjoyed reading about events through their eyes. I also thought it was interesting the way the chapters reflected the characters desperation and mental states as the novel progresses. Sometimes this can feel a little muddled, but it didn’t detract from my enjoyment of the story.

We get a fascinating look at the way extreme situations and pressures can affect people in different ways: paranoia, isolation, calculation, tribalism, and so forth. There’s a lot going on in the novel, and Grey leaves much of it for the reader to analyze and dissect (I really liked this — the novel is blissfully spare on exposition). I think it’s possible that the suspense could have been ratcheted up a bit more if the novel had been just a bit longer. A few extra chapters could have helped us get to know some of the characters a bit better, and increase the tension. But it’s pretty damn good the way it is — the collapse in relations between the characters happens fast, and as supplies dwindle and more strange goings-on occur, things get really interesting and tense.

There are some elements to the story that might make people think they know exactly what is going to happen, but I think Grey’s done a great job of throwing in a few surprises to keep readers guessing and on their toes.

What lifts this novel above others in the sub-genre, though, are the final two chapters. Rarely has “realization dawned” while reading a late chapter, but the penultimate chapter was fantastically composed; followed by an open-ended final chapter that was equally excellent, this was a startling, superb ending. I didn’t figure it out at all, until about two pages before the reveal (which was I think, the authors’ intention). Quite excellent.

If you like psychological thrillers, then I highly recommend this novel. A must read of 2015.

S.L. Grey‘s Under Ground is published in the UK by Macmillan on July 16th, 2015. There is no North American publisher at the time of writing. (Something that should be remedied ASAP.)

3 thoughts on “Review: UNDER GROUND by S.L. Grey (Macmillan)”