It’s September 2017, and the United Kingdom is on the verge of a crucial referendum that will determine, once and for all, if the country remains a member of the European Union, or goes its own way. The stakes could not possibly be higher, and the outcome is delicately balanced.

But, unsuspected by the electorate, and unknown to all but a handful of members of the Prime Minister’s innermost circle, there is a shocking secret at the very heart of government that, were it to become known, would change everything in an instant. A group of ruthlessly determined individuals will stop at nothing – including murder – to prevent that from happening.

I have been familiar with Andrew Marr’s non-fiction work for years — his radio show has been a staple in my household for a long time. Therefore, when I learned that Marr had written a tongue-in-cheek political novel, I was very interested to read it. Head of State is an interesting, short novel; well-written and packed with insider knowledge. It was also, sadly, a little uneven.

The novel offers a good balance of the satirical and the sinister: what the conspiracists actually do is pretty vicious at times, not to mention deadly. At the same time, the situation and the incredibly dense decisions some of the characters make add to a general air of the incredible and slightly ridiculous. That being said, the way some of the characters are developed does make their decisions feel entirely within character… The farce elements are well-done, but will no doubt have some readers scratching their heads. By their nature, they’re silly, of course, but they feel just on the right side of ridiculous. 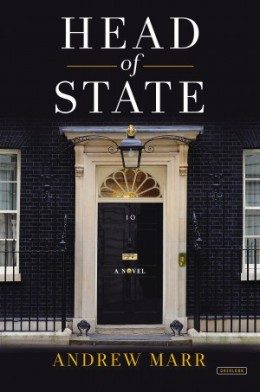 Unsurprisingly, Marr writes persuasively and engagingly about the media and politics — two key elements of the story, alongside the conspiracy and cover-up. There are clearly topics that are more dear to him (the decline of the media, the shallowness of modern news content and the general lack of engagement and gullibility of the electorate), and this shines through. You can sense these passages quite easily, given how eloquent and polished they appear.

There are also, however, some passages that felt like Marr was indulging in some axe-grinding (getting something off his chest, perhaps); and at other times he indulged in some info-dumping (when a topic is clearly of interest to him, but doesn’t quite fit into the narrative, but he goes into it anyway). Unfortunately, these happen more often than I would have liked, which gave the novel an uneven feel. As the story progresses, I could predict some of the developments, but he does a good job of never allowing it to become too silly (relatively speaking). So, for me, the only weakness was the uneven pace, which slowed me down quite a bit more than anticipated. For many, I doubt this would be much of an issue.

Marr includes some “meta” elements — for example, some characters refer to “Andy Marr’s show”. It was also amusing that Rory Bremner features prominently in the conspiracy.

Overall, then, a well-written if uneven novel. If you’re a fan of satire, UK politics and caper novels, then I think this is for you. The plentiful commentary on British politics and media, also, will be of value — it’s well-observed, sharply analysed and engagingly written.

Head of State is published in the UK by Fourth Estate and in the US by Overlook.