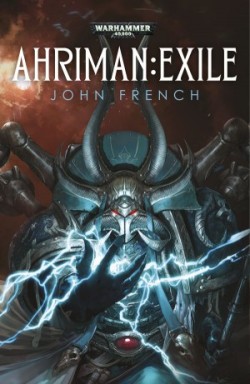 First in a series, good but didn’t live up to expectations

All is dust… Spurned by his former brothers and his father Magnus the Red, Ahriman is a wanderer, a sorcerer of Tzeentch whose actions condemned an entire Legion to an eternity of damnation. Once a vaunted servant of the Thousand Sons, he is now an outcast, a renegade who resides in the Eye of Terror. Ever scheming, he plots his return to power and the destruction of his enemies, an architect of fate and master of the warp.

After reading and loving Aaron Dembski-Bowden’s The Talon of Horus, I was in the mood to read more fiction about the Traitor Legions. I’ve had Ahriman: Exile for quite some time, but just hadn’t got around to reading it. Talon of Horus is told from the perspective of one of Ahriman’s greatest rivals, and because I enjoyed French’s two Ahriman short stories, this seemed like a perfect next read. It was… good. Unpolished, but good.

The premise of this novel had a lot of potential: Ahriman is still living in exile, following his banishment from the World of Sorcerers. Still reeling from the impact of his Rubric, a ritual intended to save the Thousand Sons from the corrupting and mutating influence of the Warp, he has withdrawn into himself: tamping down his psychic powers, cutting himself off from the empyrean and limiting his abilities. Eking out an existence under an assumed name, working for objectionable renegade warbands, he’s not the happiest of sorcerers. He’s a bit of a pathetic figure, actually.

After a band of Thousand Sons track him down, he’s forced to take control of his fate once more. He is joined by a pair of renegade survivors, and they set out to find out who is hunting Ahriman and why. It’s… not the most riveting read. It’s quickly-paced, and French’s prose is good, but there was something off about the novel. The story kind of meanders, as Ahriman agonizes over whether or not he should embrace the awe-inspiring sorcerer he used to be. I never really felt the angst or conflict Ahriman was supposed to be feeling. It was inevitable that he would embrace his powers by the end (and it is in a pretty impressive manner — French has a knack for writing impressive warp/psychic abilities), but the story arc didn’t excite me much. I wasn’t hooked. I had a little difficulty engaging with the characters. Comparing the characterisation here with that found in the Horus Heresy series, and the aforementioned Talon of Horus, it’s difficult to not be a little disappointed.

That’s not to say the novel is no good: it’s clearly part one of a larger story arc. Ahriman needs to come back to himself and accept that hiding from fate and the past is doomed to failure and, well, boredom for him. He’s miserable, a bit angsty. The final 10% of the novel is pretty good: action-packed, lots of impressive, over-the-top sorcery, and promising hints for the future. French’s short fiction has been great, so I wonder if Ahriman: Exile suffers from some hesitancy, or lack of confidence? It felt unpolished, and at times a bit choppy.

I’ve bought the sequel, Ahriman: Sorcerer, which I’ll read soon (maybe in January), and I’m looking forward to doing so. Hopefully, French will have become a bit more comfortable and confident with the character, making the sequel a stronger and more engaging read. French’s more-recent work has been great — for example, his Horus Heresy short fiction Child of Night and his contributions to the anthologies Age of Darkness and Shadows of Treachery; and also his Ahriman short fiction, Hand of Dust and The Dead Oracle.

If you’re a fan of the character, or Traitor Legions in general, I think you should still check the novel out. Maybe I’ve been harsh, or just spoiled by the Heresy series. I’m hopefully the series will improve.