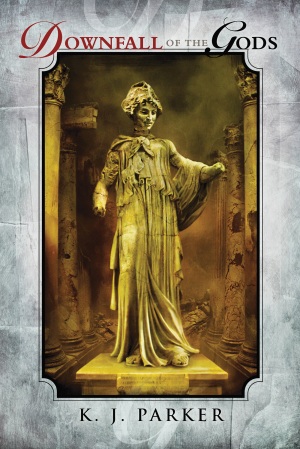 If you visit the Temple and ask nicely for forgiveness, you might get it — assuming you aren’t Lord Archias and you haven’t killed the Goddess’s favorite musician, Lysippus. But even goddesses are expected to follow certain rules, and as much as she wants to punish Lord Archias it seems her troublesome, all-powerful father forbids it. So the Goddess will just have to get around that by forgiving Lord Archias if he can manage some simple — or, rather, seemingly impossible — tasks. A Goddess has to do what a goddess has to do.

And in World Fantasy Award winner K.J. Parker’s sharply inventive new novella Downfall of the Gods that means everything from soothing supernatural egos to accompanying the argumentative Lord Archias on an epic quest to save his soul… and get her own way. As the Goddess and her mortal charge make their way across the world to the Land of the Dead, a host of divine surprises await them. Could what they find at the end be the downfall of the gods themselves? Only time will tell.

“The generally accepted form of communication in my family is melodrama,” says the divine narrator of Downfall of the Gods. Fans of Greek and Roman mythology will certainly be familiar with this notion. In this novella, K.J. Parker turns his playful pen to dissecting humanity’s relationship with its gods, and how pernicious and frustrating the gods can be. A quickly-paced, well-written and amusing novella. I really enjoyed this.

They have different names and specifics, but the gods in this novella are clearly influenced by Greek and Roman gods. If you are familiar with these mythologies, then this novella is peppered throughout with amusing asides, and is generally playfully wry. The narrator is a precocious goddess, constantly asking questions and pointing out the ridiculous flaws in their omnipotence and operating procedures. There are moments in which Parker also pokes fun of the human tendency to attribute all things (good and bad) to the work of the gods.

There’s a recurring theme in the novella, regarding the power humans have conveyed on to their various mythical and fantastical deities. Specifically, their omnipotence, and how… inconsistently this omnipotence manifests in the lives of their devotees. Parker plays with this rather well, switching up the perspective between the goddess and Lord Archias, as they journey together.

“To the gods all things are possible,” I said, “but there’s stuff we can do that we don’t because it would make things worse, not better. Counterproductive, I think is the word I’m groping for.”

“I see,” he said. “In other words, you’re very powerful but hopelessly badly organised.”

If you’re familiar with Parker’s short fiction already, then I’m pretty sure you’ll know what to expect from Downfall of the Gods: a well-written, thoughtful, entertaining short tale. There are a few twists, and interesting observations, and trope-tweaking moments.

K.J. Parker’s Downfall of the Gods is out now, published by Subterranean Press. The novella will also be included in the author’s next anthology, The Father of Lies.

Also on CR: Reviews of The Devil You Know and The Last Witness

4 thoughts on “Quick Review: DOWNFALL OF THE GODS by K.J. Parker (Subterranean Press)”