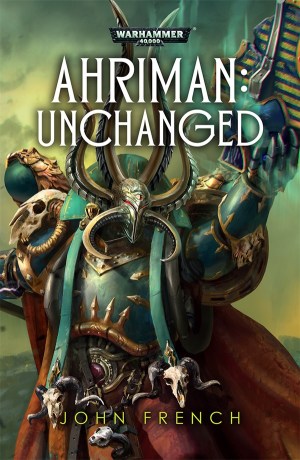 Ahriman’s reaches the end of his journey, and executes his second Rubric…

It has taken many long years and countless sacrifices, but finally Ahriman, former Chief Librarian of the Thousand Sons, now exile and sorcerer, is ready to attempt the most audacious and daring feat of his long life. His quest for knowledge and power has all been for one purpose, and he would now see that purpose fulfilled. His goal? Nothing less than undoing his greatest failure and reversing the Rubric that damned his Legion…

This is the final book in John French’s Ahriman trilogy, and it is epic. If you’re a fan of the Thousand Sons legion, in WH40k or in the Horus Heresy series, then this trilogy is a must read. Ahriman: Unchanged details the culmination of Ahriman’s long quest to fix the damage he wrought with his first Rubric. He faces a long journey home, multiple forces arrayed against him, and potentially the wrath of his father… Overall, this is a fantastic conclusion, and I very much enjoyed it.

As with French’s previous Ahriman novels, it’s never entirely clear how much time has passed between different parts of the story. This novel begins with Ahriman pretty much ready to try the Second Rubric. First, however, they need to get to the optimum location: Prospero. The homeworld of the Thousand Sons, and the site of their greatest defeat. It should not come as a surprise that the nature of the Rubricae is a prominent subject of the novel. The animated, dust-filled armour of the Thousand Sons marines, they appear little more than automata who dance to whatever command is given them by the Legion sorcerers. Ahriman, of course, believes otherwise: he believes that his second Rubric will bring them back, reverse the damage and terrifying result of his first Rubric. At one point, Gaumata and Ignis, members of his band of exiles, discuss how they see the Rubricae (forgive the longish quotation):

+The Rubricae do not respond because you call their name. Do you understand? They respond because their name is a thread that pulls what is left of them a little closer to the light. Pull too hard and they come too close. They remember too much, and they…+

+Become dangerous. Potentially, that is.+

Ignis looked down at the ranked Rubricae. He formed the name of a warrior he had not seen for almost a thousand years. One of the crested helms twitched upwards, and two pale motes of light stared up at him from behind crystal eyepieces. He looked back. Empty shells of armour spun with sorcery, he thought. Nothing more. He tilted the shape of his will. The Rubricae looking at him tilted its head to the side. You call them by their names, and they respond, they walk and fight, and watch, but who is to say that what drives them is even anything to do with what they were in life? Once we believed that we had angels on our shoulders, and they were daemons. How much easier is it to believe the same lie than the truth? He shrugged, allowing his thoughts to sink down under the comforting spiral of numbers and ratios and the symbolic geometry of all things. +No,+ he sent. +I do not think they are anything more than they seem.+

In other ways, Ahriman: Unchanged is a tremendously epic novel. Not in length (it’s a pretty-standard 400~ pages in length), but French pulls out all the stops when it comes to the action. Without laying out any spoilers, there are a number of battles that are… well, insane. This is not entirely surprising, given the Thousand Sons’ prodigious psychic gifts, and their magnetic effect on all things Chaotic. There are daemons aplenty. There is also the return (in WH40k fiction at least) of a certain Primarch…

As the above pull-quote regarding the Rubricae suggests, this novel is not all about the bolters. As with all of the best Black Library fiction, French does a great job of adding layers to the characters — whether Ahriman or the supporting cast, each is further developed in interesting and engaging ways. Many question Ahriman’s role as potential saviour of the Legion, while also not able to identify a better alternative. There is a clear schism within the Legion, too: Ahriman’s exiles are vilified by those who remained completely loyal to Magnus, and continue to live on the Planet of the Sorcerers. There’s a fair amount of reflection on the development of Ahriman and also his Legion.

+I knew less when I cast it the first time.+ He paused his thoughts as he dabbed at the blood on his lips. A bitter smile twitched his mouth as his fingers came away marked red. +The power I wielded then was… naïve. And the curse on our Legion was more straightforward. Our brothers were flesh – drowning in mutation, but flesh nonetheless. Now we are dealing with spirit, and dust, and echoes of being. The cure cannot be exactly the same because the point we start from is not the same. And there are other considerations.+

I benefited from reading this immediately after finishing Graham McNeill’s latest Horus Heresy novel, The Crimson King: there are many links between the two. Not only in terms of the overall Thousand Sons story, but also thematically — I’m really interested in the idea of Magnus’s fractured soul, and what it means for his character and his sons. (Imagine a horrendously powerful daemon suffering from Alzheimers…) French also does a great job of reminding readers that, while we know about the Heresy and the Legions who turned against the Imperium, the reality for many of the inhabitants of the WH40k universe is very different:

+The Imperium does not remember that it even existed,+ sent Ahriman, then looked around the Circle again, nodding at each of them as they met his gaze. +Its name, like ours, is lost to time and wilful self-deception. The virtue of the blind, the armour of contempt, the shield of ignorance, call it what you will. We and our past are not dead to them, we never existed. Only myths persist, distortions created by time and the gap between knowledge and fear. We are the ghosts and monsters of this age, creatures that slither out of the dark places to punish those who think that they dwell in the light. The small, small number who know something of us fear us even more, and guard that knowledge with atrocity. While we have been fighting our own wars, the Imperium removed us from history.+

Reading the Heresy novel and this one so close together also shows just how far the Legion has fallen — especially those who remained on the Planet of the Sorcerers. Their anxieties about the Warp and its denizens have been pretty much stripped away, and many have wholeheartedly embraced their powers and what the Warp has to offer. Naturally, this means some parts of the novel are truly bizarre (in a good way), and the final quarter or so is practically bursting with warp-fuelled potential and strangeness. French pulls this off, however, by never losing focus of the story he’s trying to tell.

There’s plenty in this novel that could be explored in the review, but I want to keep this (relatively) short. There are plenty of Easter eggs for fans of the Horus Heresy series and the WH40k game background. It’s not essential to have read these other works in order to enjoy the Ahriman trilogy, but they will certainly add extra layers and revelations to what you read here.

The ending sets things up nicely for the new Dark Imperium reality that was just launched for WH40k, and offers a tantalizing hint of what may lie in the future for the Thousand Sons. I really hope someone is commissioned to continue their story. As I said at the top, if you’re a fan of the Thousand Sons and Horus Heresy series, then the Ahriman trilogy is a must-read.

Ahriman: Unchanged is out now, published by Black Library. The series is also available in a collected edition.