Skip to content
HomeQuick Review: THE DEVIL YOU KNOW by K.J. Parker (Tor.com) 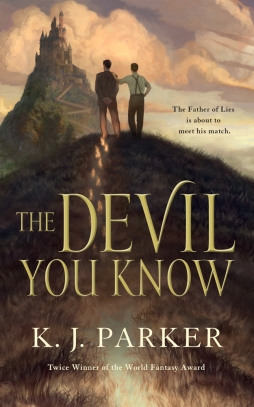 The greatest philosopher of all time is offering to sell his soul to the Devil. All he wants is twenty more years to complete his life’s work. After that, he really doesn’t care.

But the assistant demon assigned to the case has his suspicions, because the philosopher is Saloninus – the greatest philosopher, yes, but also the greatest liar, trickster and cheat the world has yet known; the sort of man even the Father of Lies can’t trust.

He’s almost certainly up to something; but what?

I’ve had a very mixed relationship with Parker’s fiction. I’ve loved some of it, and I’ve found some to be painfully slow. The Devil You Know is… well, pretty much perfect. Parker’s writing is superb, the story excellently paced, and the characters fully fleshed out and realistic, despite the slim length of the novella. Read The Devil You Know, and it’s clear why Parker is so respected and beloved. This is a fantastic, must-read novella.

What I loved most about the story was the evolving relationship between our narrator and Saloninus, as well as their voices. When they start out, and it’s a clear business transaction, a bit of back-and-forth about why Saloninus wants to sell his soul. Over the course of the novella, however, they become closer — there is respect, and even friendship. Given the ironclad nature of their contract, they can afford to relax a bit, enjoy each other’s company and live as companions and friends, as opposed to enemies. They engage in a few discussions about morals and ethics, aesthetics, even international relations theory and government…

“That’s bureaucracy for you. Never follow a straight line when a spiral will get you there eventually.”

It makes for an intelligent, engaging and addictive read. We also get some great observations from the devil, as he (it?) ponders the changing Earth.

Evolution takes no prisoners. A loathsome philosophy, but hard to argue against. Repulsive, but entirely valid. Otherwise, the Earth would still be populated by giant pea-brained lizards. (Actually, I remember them with affection; even though they spent their entire lives poised between blood-lust and mortal terror, eating and being eaten, trampling down forests with every pace, and stealing each others’ eggs from the nest, at least they never invented morality. Simpler times. Happier times.)

Parker’s wit is sharp, and wielded perfectly — keeping the tone light, but never descending into farce or distracting from the story and themes it is discussing. For example, when they first discuss the terms of the contract, and are getting to know each other:

“I set out to prove that you and your kind don’t exist.”

“Gods.” Another sip; a slight frown. “Devils. Goblins, ghosts, elves, and sprites. But you liked my books.”

“You’re seeking to enter into a contractual relationship with someone you regard as a myth.”

“I write stuff,” he said. “I don’t necessarily believe it myself.”

“Yes, well.” He shrugged. “You’re the public. And anyway, how can you possibly believe it? You’re living proof it’s wrong.”

“I’m convinced by your arguments about the origins of conventional morality. Which happen, by the way, to be true.”

And again, later in the same scene:

He looked at me, then nodded. “A lot of illegal things,” he amended. “I’ve told a lot of lies, defrauded a lot of people out of money, cheated, stolen. Never killed anyone—” I cleared my throat. “Deliberately,” he amended, “except in self-defence.”

I read it in two sittings, only putting it down when the real world had to intrude. As the story progresses, and it becomes clear that Saloninus is up to something, the pace picks up and Parker gives us an interesting mystery, too. For some reason, I find this novella really difficult to review. Perhaps it’s because Parker writes so well, and that to discuss his points (or his humour), the best way is to use his words.

Anyone familiar with Parker’s previous work will know that he writes superb, even sublime prose. The Devil You Know will confirm this for you once again. If, like me, you’ve found some of his novels a little slow-going, even ponderous in the past, then you will be pleased to hear that this novella does not at all suffer from this flaw: it is briskly-paced, engaging and thought-provoking. One of the best novellas I’ve read in years.

6 thoughts on “Quick Review: THE DEVIL YOU KNOW by K.J. Parker (Tor.com)”